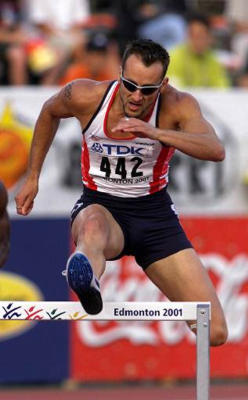 José Carvalho's is a Portuguese 400m-hurdler from the 80's. In 1975 he first ran sub 50 seconds at a Europacup meeting in Lissabon. He was a 400m hurdles finalist at the Olympics in Montreal and Moscow.  Nowadays he is a sprint -hurdle coach for the Portuguese athletics federation where he coaches several 49-ers (male) en 55-ers (female) hurdlers. José uses a model that was adapted by Dutch hurdle-coach and former 400m-hurdle athlete Harry Schulting. And to be frankly "carvalho" is probably more famous for his model in the Netherlands then he is in his own country. He uses his model not only to analyse a race but also too create programs.

Carvalho's model was built on the thought that you run fastest if you use your energy wisely. When running 400m a deceleration is inevitable. By deceleration slowly from the first hurdle to the last, you will find yourself in a much better position at the later stages. Because when hurdling, changing legs and changing stride patterns can really make in impact, it whould be unfair to ask a hurdler to decelerate evenly. Therefore Carvalho cuts the 400m hurdles into 3 parts:

Carvalho states you should run every part 0.6 seconds slower then the one before. If you do not lose this amount of time from part 1 to part 2 you'll probably have to pay in part 3. If you don't lose that amount of time from 1 to 2 and from 2 to 3 your could run a bit faster in the early stages, it's likely your hurdling technique doesn't allow you to do that. If you lose more that 0.6 seconds you probably should work on your endurance.