Running 30m flat out with a flying start is the most used and accepted form of a speed test for sprinters. And by using electronic equipment it is easy to setup and is gives us reliable results. It is perfectly simple. But every coach's mind starts to wonder. At least I did. Couldn't I do more? The simple 30m-test is, even for a 100m sprinter, too shallow. If you want to evaluate speed you should have some handles to work with. Could I design a test that in indicates shortcomings in speed? A test that produces results off-season? A test that is less influenced by the weather? A test that is also a good workout in-season and off-season?

The common assumption is that when acceleration ends top speed is reached. Unfortunately for athletes this is not the case. Most athletes cannot reach top speed if they have to accelerate themselves. The mere cost of acceleration is preventing them from reaching top speed. An athlete's speed is limited by three major factors. All these three factors are time related and interdependent. Their characteristics can change quickly due to overload, depletion or other biological processes.

The first main factor is power. To generate speed force has to be applied. Not only the legs need power to accelerate the body mass but the whole body needs control power to guide, transfer and direct forces working from or onto the body. For example the forces needed to accelerate and decelerated the legs are enormous. The foot goes from 0 to over 20m/s and back to 0 in less then 0.2 seconds every step of the way. The more power, the easier it is to apply the correct technique. But power is a far from constant factor. The faster a muscle has to contract the less force it can deliver. And then there is fatigue; the high power output supplied by fast-twitch muscle fiber will decrease rapidly, where less powerful slow-twitch muscles will hardly show any decrease.

The second main factor is energy; can an athlete free enough energy to maintain maximum pace. The phosphate-creatine in the muscle will keep him running for 3 seconds maximum [1], after that energy around the muscle will have to be converted and transported into the muscle to fuel it. As time progresses energy has not only to be obtained from further away, but the quick-to-convert energy levels are dropping very rapidly. Within 60 seconds the muscles will be left with slow-to-transport slow-to-convert aerobe energy. The energy delivery process is not only very complex it is also very personal. It is ever so hard to say which mix of energy a sprinter is using in a specific part of a race. In training this quest becomes even more complex.

The third factor is coordination; can the athlete's brain actually control the muscles in such a way high speed can be develop and controlled effectively. It is possible the technique of athlete is preventing him to reach high speed. Running technique has to be developed and nourished. During the career of an athlete his coordination has to change as his length, weight, power and speed develop. Once a high standard in coordination is reached, the work is not done. Not in the least coordination is effected by time, especially in short term. The longer and faster the neurons are firing, error and overload become more likely. The more skilled the athlete's technique, the better he will be able to compensate for neural failure.

There is another important factor that limits speed but is a cross-over from the first three. But it's impact can be so big it needs mentioning. As the ATP levels in the muscle drop severe and the body isn't able to compensate for the high ADP levels, ADP's get split into two IMP's to quickly reestablish balance between ATP en ADP. Unfortunately this IMP intervenes with the way the muscle works. It prevents the actine locking up to the miosine, resulting in loss of muscle power. This loss of power is commonly referred to as 'lactate', with the also typical loss of coordination. Although the effects of IMP become very obvious at the later stages of an 400m, the drastic effect it has on speed can come after as little as 7 seconds. Once IMP is formed it is very hard to get rid of. Even hours after an IMP built up muscles will contract significant less hard.

We have identified the three major players in speed. My test should be able to identify the weakest factor of these three, so you will know what to work on. If the test would consist of a set of runs the lack of power should the easiest to point out. No matter what distance or recovery is set a subject with insufficient power will run as fast on every occasion. Imagine a well trained marathon runner here doing a sprint workout, he will not run fast but he will not wear out either.

The energy factor is the next best thing to point out. The longer the run the slower we go, switching from one energy system to another. If recovery is set sufficient but not excessive anyone crossing that virtual barrier where IMP is created will surely lose momentum fast, pointing out the failing energy source.

Lack of coordination is hardest to point out. Because the mind is involved here the subject will not be as 'unbiased' as he should be. Especially athletes with weak coordination can easily switch running technique. From forceful to relaxed, from upright to leaning or any other change. But there is one clear effect; when neural fatigue kicks in it kicks in hard, speed will drastically drop. Because lack of coordination often comes with lack of power, the coach should watch for the little signals, watching the subjects run.

Now we know what we are looking for its time to establish a test protocol. The test should consist of a number of run's, for one run will not give us enough data to work with. I have chosen a set of runs that will definitely wear out any kind of sprinter. If it is lack of energy it will have to show. If we are to be sure to distinguish lack of power from lack of coordination the test should reach the boundaries of exhaustion, a severe build up of IMP must be reached. Because all runs must be exercised at full speed a total running time of up to 45-50 seconds will do.

And then there's our first test. Let's look at some results (table1.1).

A second test from the same subject shows a better-preformed test (table 1.2). The 30m's could go faster as expected. Speed now slowly drops over the runs. This indicates the transition from one energy source to another. The dramatic drop in speed over 120m is now definitely a case of energy depletion. For this being a 100m hurdler an expected result.

The second sample shows a more perfect test (table 2). The subject shows light sloping results, which is good. The fact the 120m is as fast as the 90m but significantly slower then the shorter runs is a typical 400m-runner-sign. He has little problem freeing enough energy to keep up a high pace.

The third sample (table 3) is a harder to analyze the results. Speed is almost consistent throughout the test. There is no sign of different types of energy used, so it has to be one of the others. If it's pure lack of power a drop at longest distance would not be expected. If it is pure coordination the drop should be more severe. If there is doubt: get working on the coordination. 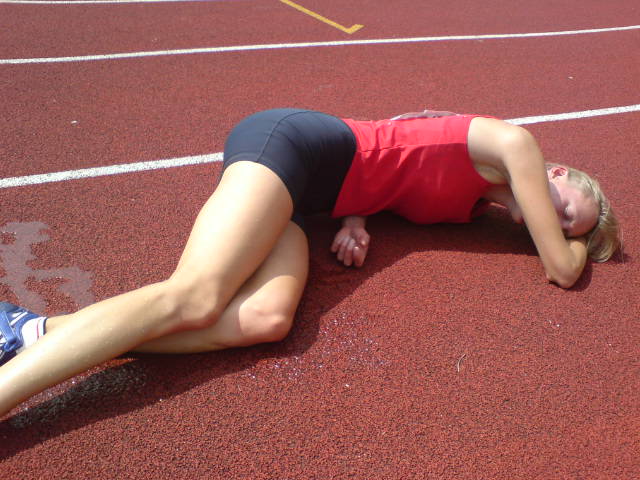 I have chosen a set of runs that will definitely wear out any kind of sprinter.

1 Many studies claim a much longer use of phosphate-creatine, up to 20 seconds. Fact is that glycogeen will be responsible for 90% of the energy supply in a mere 3 seconds. Phosphate-creatine will be depleted, depending on definition, after 7-20 seconds.