What do the arms do when running? 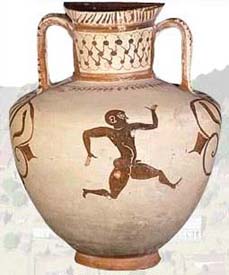 Running without the use of arms is considered almost impossible. And there is a general consensus the arms should move opposite of the legs. Some ancient pictures like us believe that the old Greeks used to run with arms and legs likewise, but a simple test shows it is rather unlikely they really did. There is a common understanding that you can benefit from the use of your arms, but on what and how coaches seem to disagree.

There is lots of truth in what they say about the arms. With arms you can set the rhythm. When focusing on the arms it's more easy to run. And you will keep up longer at the later stages of a race if you swing  your arms.  The most common theory is that the arms are compensating for the axial momentum the legs create; while pushing the body forward the legs generate rotation, which is compensated by the arms moving in the opposite direction.  But you don't have the be a physician or bio mechanic to understand this can not be true.

We can gain a little insight on the arms when trying to run without them. And although it is hard to run without the use of your arms it is not entirely impossible. Once you run very erect, lift your knees high and don't push-off to much, some of us can run fast without using their arms. It will be harder to accelerate and you will definitely not keep it up very long. It is not impossible to run without the arms, but it just is very hard. It will just cost you more, not so much in energy needed but it effort to coordinate. Somehow the arms support something that cannot be found elsewhere.

So what do the arms do?

The arms do not compensate but they catalyze the motion. By moving your arms you assist your upper body in swinging your leg forward. Or more precise; catapulting it forward. Before your foot leaves the ground, you pre-strecth all muscles in the front of your body by bringing your opposite arm and shoulder back, and you will not stop streching until the leg stops moving forward. The need to drive your arms forward can be considert  the greatest misassumption about the arms. Without the arms this pre-stretch can be achieved but it is, as mentions before, much harder. Hopefully you see now why lots of women keep their arms close, swinging their arms will induce more rotation, not compensating it. And now you finally see why focussing on the arms helps you getting along in the latest stages of a 400 or 800m; you will be focusing on your posture, reastabling balance in your upper body.